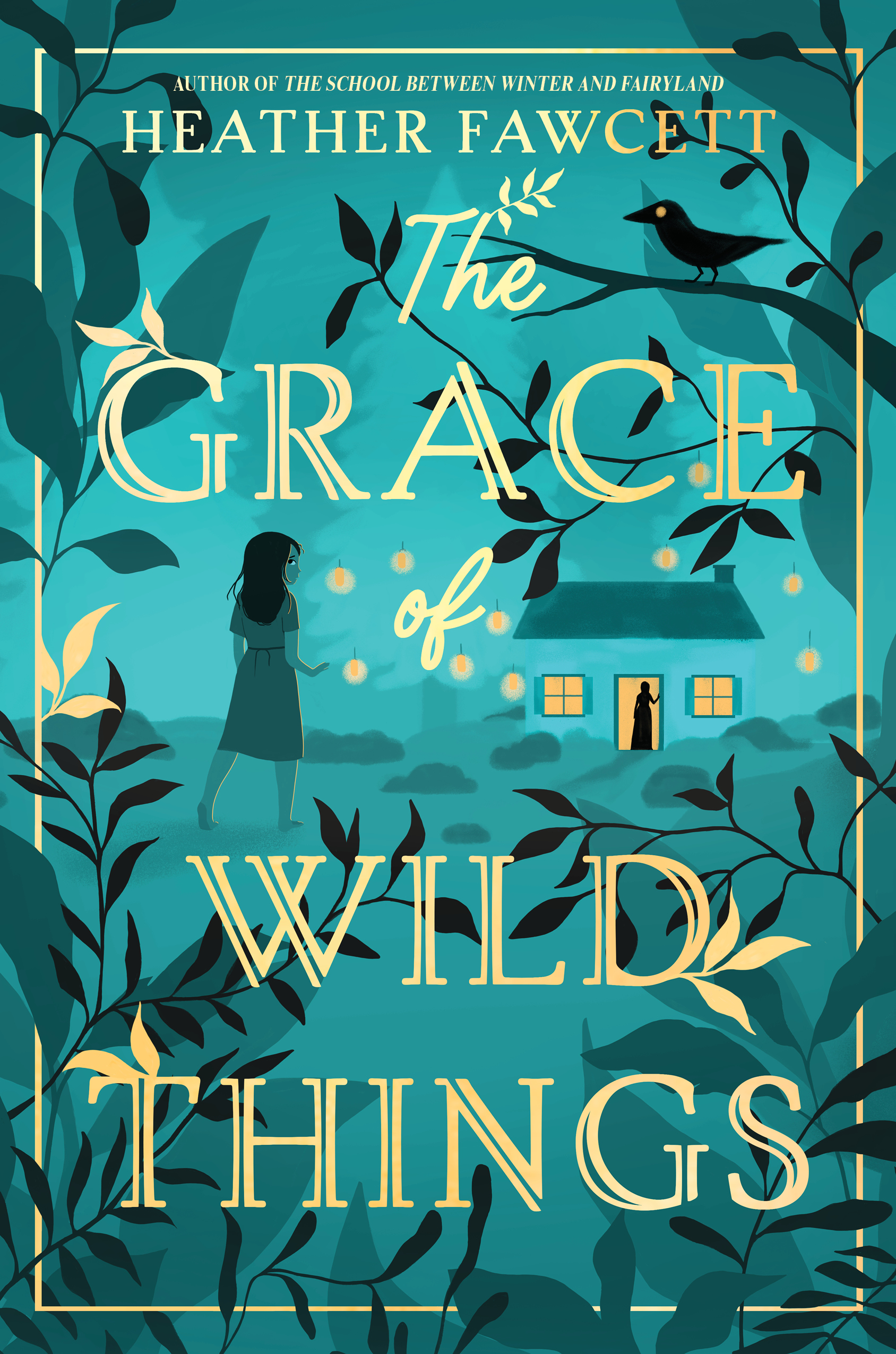 The Grace of Wild Things

An inventive and fantastical reimagining of Anne of Green Gables—with magic and witches!—that explores found family, loss, and the power of a girl’s imagination, from the acclaimed author of The Language of Ghosts and The School Between Winter and Fairyland. Perfect for readers who loved The Girl Who Drank the Moon and Serafina and the Black Cloak.

Grace has never been good at anything except magic—not that anyone believes her.

While other children are adopted from the orphanage, nobody wants Grace. So she decides to make a home for herself by running away and offering herself as an apprentice to the witch in the nearby woods. After all, who better to teach Grace to use her magic? Surely the witch can’t be that bad.

But the witch is that bad—she steals souls for spells and gobbles up hearts. So Grace offers a deal: If she can learn all 100½ spells in the witch’s grimoire, the witch will make Grace her apprentice. But if Grace fails, the witch can take her magic. The witch agrees, and soon an unexpected bond develops between them.

But the spells are much harder than Grace expected, and when a monster from the witch’s past threatens the home Grace has built, she may have to sacrifice more than her magic to save it. 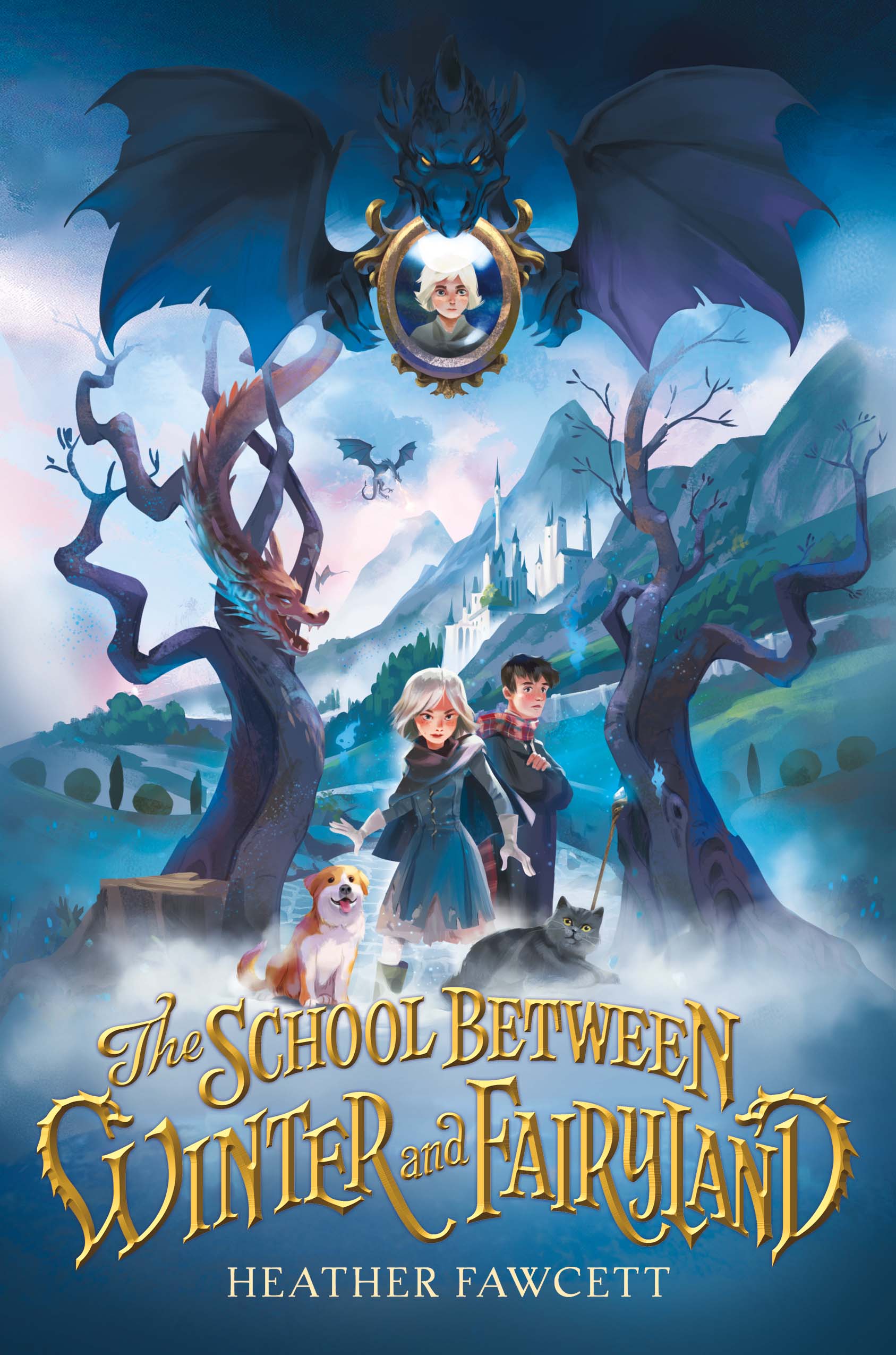 The School Between Winter and Fairyland

A fresh and exciting twist on magical boarding schools, the well-loved Chosen One trope, and the nature of true heroism—from the author of The Language of Ghosts and Ember and the Ice Dragons. Perfect for fans of middle grade fantasies including the Serafina series by Robert Beatty and Neil Gaiman’s Coraline.

Twelve-year-old Autumn Malog is a servant at the enchanting Inglenook School, where young magicians study to become the king’s future monster-hunters. Along with her Gran and three too many older brothers, she works as a beastkeeper, tending to Inglenook’s menagerie of terrifying monsters.

But when she isn’t mucking out the wyvern stalls or coaxing the resident boggart to behave, Autumn searches for clues about her twin brother’s mysterious disappearance. Everyone else thinks he was devoured by the feared Hollow Dragon, but Autumn is convinced she’s heard—and glimpsed—him calling to her from within the castle walls. But who will believe a lowly servant?

So when Cai Morrigan, the “Chosen One” prophesied to one day destroy the Hollow Dragon, comes to her for help, Autumn agrees on one condition: Together, they’ll search for her brother and uncover the dark truth at the heart of enchanting Inglenook School once and for all.

★ “Themes of class, education, and equality are interwoven seamlessly, providing additional food for thought. Once readers are buried in the pages, they’ll beg to know when the sequels are coming out. A magical addition to any bookshelf.” —Kirkus (starred review)

“With delicious personal interactions, an adventure that gets deeper as the tale progresses, and a setting that Hogwarts fans might like to climb into, this familiar-yet-original fantasy hits all the marks.” —The Horn Book

“A wonderfully imaginative story filled with an enticing array of magical creatures, The School Between Winter and Fairyland celebrates the abiding bond of siblings, the many kinds of heroism, and the revolutionary power of empathy. This book is a delight.” — Anne Ursu, author of BREADCRUMBS and THE TROUBLED GIRLS OF DRAGOMIR ACADEMY

“An adventure with monsters, magic, and mysterious prophecies! You won’t want to put it down!” —Jessica Day George, NYT bestselling author of the TUESDAYS AT THE CASTLE series

“I tore through The School Between Winter and Fairyland faster than a wyvern claws through hearts. An exhilarating, witty, brilliant twist on a classic Chosen One story. With magic and monsters and adventure abound, attending Inglenook is a MUST.” —Lauren Magaziner, author of the CASE CLOSED series

“This book has everything I love about fantasy, tied together with gorgeous writing, vivid visuals and a gutsy, down-to-earth heroine.” —Amelia Mellor, author of THE GRANDEST BOOKSHOP IN THE WORLD 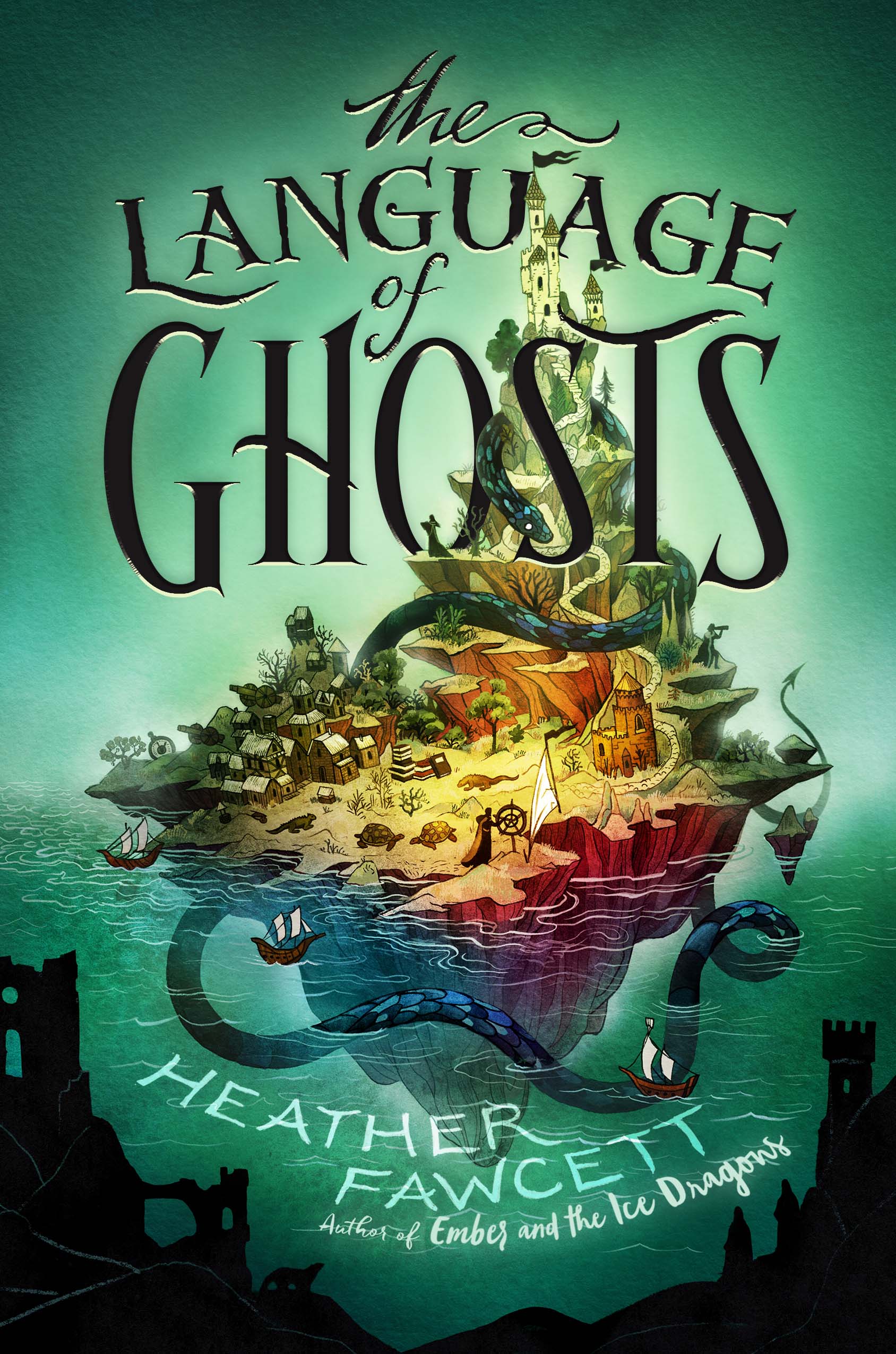 The Language of Ghosts

The Penderwicks meets Howl’s Moving Castle in this thrilling middle grade fantasy adventure about a trio of royal siblings who unlock a long-forgotten magical language in their bid to reclaim their stolen throne—perfect for fans of Kelly Barnhill and Robert Beatty.

Forced into exile on an enchanted, moving island, ex-princess Noa Marchena has two missions: reclaim her family’s stolen throne and ensure that the dark powers her older brother, Julian, possesses don’t go to his head in the process. But between babysitting her annoying little sister, Mite, and keeping an eye on the cake-loving sea monster that guards the moving island, Noa has her hands full.  When the siblings learn that their enemies are searching for a weapon capable of defeating Julian—whose legendary spell weaving is feared throughout the kingdom—once and for all, they vow to get to it first. To everyone’s surprise, the key to victory turns out to be a long-lost magical language—and only Noa can speak it.

But what if by helping her brother, Noa ends up losing him?

★ “A sly, cake-eating sea serpent; an elderly dragon familiar; and vain otters who can “move in and out of death” make for an endearing supporting cast, while the siblings, with their distinct personalities and inevitable squabbles, make for an authentic focal point. Fans of Eva Ibbotson and Diana Wynne Jones will appreciate Fawcett’s well-paced, wholly imaginative middle grade romp.” —Publishers Weekly (starred review)

“An enjoyable, light-as-air romp that satisfies while leaving enough unfinished business for a potential sequel.” —Bulletin of the Center for Children’s Books 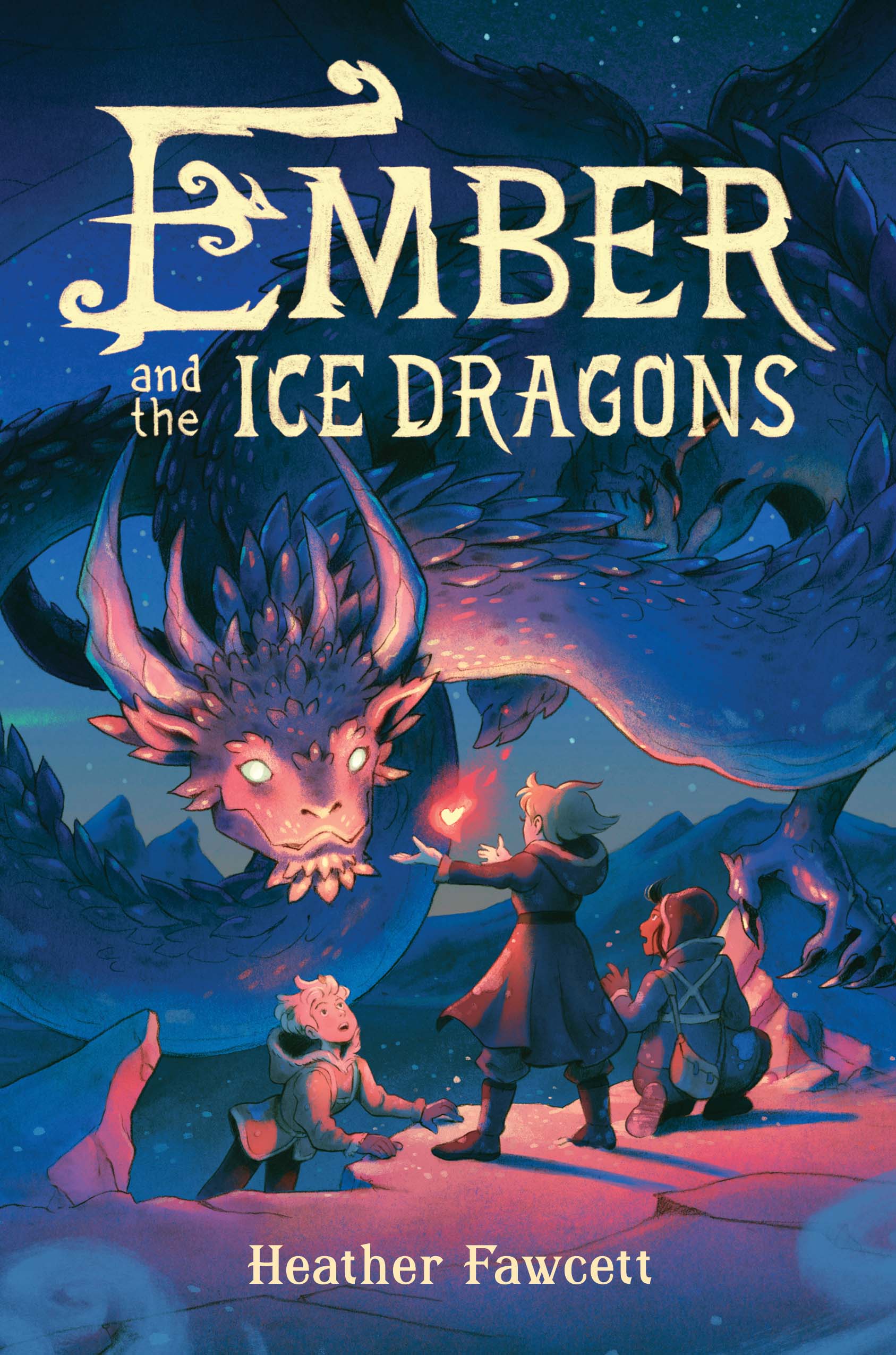 Ember and the Ice Dragons

A stunning middle grade fantasy about a girl who used to be a dragon and her adventure to save her new home—perfect for fans of the Nevermoor and His Dark Materials series.

Ember St. George is a dragon. At least she was before her adoptive father—a powerful but accident-prone Magician—turned her into a human girl to save her life.

Unfortunately, Ember’s growing tendency to burst into flames at certain temperatures—not to mention her invisible wings—is making it too dangerous for her to stay in London. The solution: ship Ember off to her aunt’s research station in frigid Antarctica.

Though eccentric Aunt Myra takes getting used to, Ember quickly feels at home in a land of ice storms, mischievous penguins, and twenty-four-hour nights. She even finds herself making friends with a girl genius called Nisha and a mysterious orphan named Moss.

Then she discovers that Antarctica is home to the Winterglass Hunt, a yearly tradition in which rare ice dragons are hunted for their jeweled scales. Furious, Ember decides to join the hunt to sabotage it from the inside.

But being an undercover dragon isn’t easy—especially among dragon hunters. Can a twelve-year-old fire dragon survive the dangers that come her way in the Antarctic wilderness and protect the ice dragons from extinction?

“Stunning descriptions and well-rounded characters are woven into a story that hums with excitement and adventure, which will leave readers wanting more of Ember and her magical world.” —Booklist

“A perfect choice for especially creative young readers, Fawcett’s new book is as irresistibly charming and unconventional as its heroine.”  —Quill & Quire

“Full of intrigue and adventure, magic and science, Ember and the Ice Dragons will keep you reading all the way to the last icy, breathless page.” —Ruth Lauren, author of Prisoner of Ice and Snow

“Smart, funny, and full of wonder. Part gripping Antarctic adventure, part richly woven fantasy, this is the rare type of story that readers will want to visit again and again.” —Kim Ventrella, author of Skeleton Tree and Bone Hollow